The Daughters of Bulgaria brings prevention and awareness of human trafficking and sexual exploitation to our communities. We proactively build relational bridges (outreach) to women who are enslaved in the sex trade and intervene on their behalf when opportunities arise. Through the Rose Garden Program, we provide recovery and reintegration to formerly exploited women with their children. Why? No one ever experiences exploitation without experiencing trauma, and this trauma affects and colors every aspect of that individual’s life – emotional, psychological, physical, relational and spiritual. 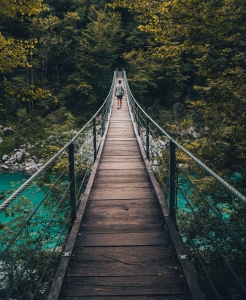 How much better would it be if we could only keep women and children from being swept away into the river of human trafficking to be commercially sexually exploited in the first place! This is Prevention & Awareness of the dangers and destruction they will face. Once swept away, IF they can escape through Outreach & Intervention, they begin crossing the bridge to what will be a life-long struggle for Recovery from abuse & to Reintegrate into society. Even so, there is HOPE for a new life! They are no longer drowning in that horrible river.

Vision: That Bulgarian women would be free from sexual exploitation and trafficking through targeted efforts in Prevention & Awareness, Outreach & Intervention, and Recovery & Restoration.

Mission: To research, to network/mobilize, and to implement pilot projects that assist Bulgarian women (often with their children) to move from vulnerability to a new way of life free from sexual exploitation.

According to the Founding Act of the Daughters of Bulgaria Foundation (DofBF), our objectives are:

The Core Values of the Daughters of Bulgaria Foundation (DofBF) drive its program and operational delivery. These values are summarized in 5 key values enacted within the DofBF’s operating model: 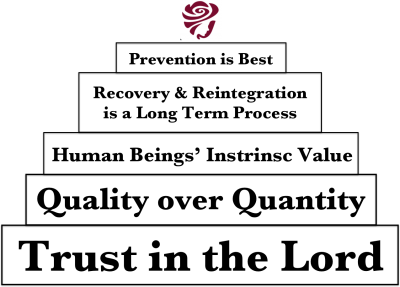 “What’s going on in your country?” she asked in a lilting New Zealand accent. “I am in Berlin, and there are so many Bulgarian women on my streets. Why?” That was the phone call in 2010 from a New Zealander who for decades had been walking the streets of foreign cities helping prostituted women. We heard, “These women on our streets [in Berlin] are your mothers, sisters, and daughters.” We saw prostituted women in a different way, for we had been blind, unable and not wanting to see, even as we passed by women being prostituted on our own streets, day after day. We learned that Bulgaria was and continues to be known as a major exporter of girls and women for the European sex industry. Why? We responded, “Help us understand!” We asked future colleagues with whom we are now networked and they coached us, giving freely of their experience, insights and training.

During 2011-12, a handful of Christian expatriots and Bulgarian nationals came together to become known as the Daughters of Bulgaria Coalition (DofBC). They grew in their commitment to reaching out to the prostituted women on the streets of Sofia offering coffee and snacks, a smile, a listening ear, and help for needs as possible. At the same time, they visited like-minded organizations throughout Europe in order to understand the scope of the tragedy affecting the Bulgarian daughters. "What did we now know? What could we begin to do? How could we respond in hope?”

In 2012, the DofBC assisted the newly formed European Freedom Network (EFN), the International Christian Alliance on Prostitution (ICAP), and Business as Mission (BAM) in hosting a combined international consultation addressing the issues of human trafficking and sexual exploitation throughout Europe. After this first “Bridge Conference” and responding to the challenge and advice from the experienced leaders of these networks, the Outreach Team continued more consistently with weekly outreaches, while the DofBC continued researching and trying to grasp who was doing what to address these issues in Bulgaria specifically. The question from the Outreach Team was, “What do we do, what do we say, when any of these prostituted women with whom we are developing relationships, asks for help to leave her place of exploitation and move towards a new way of life?” The reality was there were very few, if any, options to which they could refer the women being prostituted, for help.

While researching, one of the founders came across Servants Anonymous Foundation’s Program Model of Recovery, based in Vancouver, CA. The DofBC agreed that this was the holistic model of action which they should adopt. This model, especially, focused on the answers to the questions that the Outreach Team was asking.

In 2014, the Daughters of Bulgaria Foundation (DofBF) was registered as a non-profit organization in Bulgaria, and in 2015, the DofBF entered into a partnership relationship with the SA Foundation to establish a franchise project of their Program Model and the Rose Garden Program (RGP) was created as a subsidiary organ of the DofBF.

Throughout 2016, some of the members of the DofBC engaged in extensive training and preparation to implement the Rose Garden Program, while simultaneously continuing with the ongoing activities of Foundation with weekly Outreach Ministry and nurturing the beginnings of offering employment readiness skills to survivors of prostitution. In the winter of 2017, the RGP opened the Learning Center (full-time day program for social reintegration) and offered residential assistance to survivors of sexual exploitation and trafficking (with or without children).

A challenge by a woman reaching out to prostituted women in Prague, seeing so many Bulgarian woman said, “Give me something to send them home to.”
2004
January 1

Phone call from Berlin: “Why are there so many of your daughters on my streets?” leading to an informational meeting with Patricia Green, Alabaster Jars ministry, Berlin, Germany
2009
November 6

Investigative trip to learn from organizations working the streets of Amsterdam, the Hague, and Brussels Participation in EBF Anti-trafficking Working Group meetings, Sabodell, Spain Participation in EFN “Equip” conference in Cyprus
May 1

The Price of Sex

DofB participates in public screening of “Price of Sex”, Sofia, Bulgaria
May 7

Pre-assessment training for a possible franchise relationship to implement SAFoundation’s Program Model of long-term recovery, in Budapest, Hungary, and in Vancouver, CA
May 1

Moving into a New Life

Sponsored “Healing the Wounds of Trauma”, Sofia, Bulgaria, training with B. Randolph
April 23

S. and A. Kallauch visited to research and give training in trauma response and indoor outreach
2019
February 1

The Daughters of Bulgaria Foundation (DofBF) is governed by a volunteer Board of Directors. The members are adhere to the core values, particularly with regard to servanthood, personal recovery, community, come from different walks of life, and have various professional backgrounds.

The purpose of the Board of Directors is to oversee the Daughters of Bulgaria Steering Committee (DofBSC), ensuring that the vision and mission of the DofBF is accomplished and meets its intended social impact in the most efficient way possible. The Board is a governing/working Board and consists of between three and eight Board members. The Board of Directors governs and manages the affairs of the DofBF.

The Board of Directors is responsible for approving budgets and developing and implementing through the DofBSC, the ongoing strategic plans.

Members of the Board of Directors of the DofBF: Board members typically have at least 1 year prior experience as a member of the DofBSC, and are in good standing in their churches and society. Board members must ensure that they are available to commit the time requirement needed to fulfil their job descriptions.

The public relations policy of the Daughters of Bulgaria Foundation is designed to attract individuals seeking to be part of a solution to a global crisis, but especially for wherever Bulgarian women are being targeted for purchase and sale in the sex trade. This is mostly in Bulgaria and Europe.

We welcome these “individuals” who speak well and with conviction about the work of the DofBF and its accomplishments, for there is no better publicity. When representing the DofBF, these “individuals” whether through word or action abide by the Code of Conduct and our values and refrain from providing opinions unrelated to the work of the Foundation.

The Daughters of Bulgaria Foundation implements pilot projects that assist Bulgarian women in moving from vulnerability of being sexually exploited to a new way of life free from sexual exploitation. These projects focus on prevention, intervention, and reintegration.

A major activity of the Daughters of Bulgaria Foundation is the Rose Garden Program. This is a long-term comprehensive recovery and reintegration program, which offers women (with or without their children) an opportunity to begin and maintain their personal recovery with the goal of becoming productive members of society.

The Daughters of Bulgaria Foundation, with the decision of the Board of Directors, can engage in public policy dialogue and development activities, so long as these activities further the charitable purpose(s) of the Foundation and do not involve the direct or indirect support of, or opposition to, any political party or candidate for public office.

The Daughters of Bulgaria Foundation has a core value of creating a fair working environment. This means that:

The social impact of the Daughters of Bulgaria Foundation (DofBF) can be seen in Bulgaria, the European Union, and the United States as we interact with the issues involved in the commercial sexual exploitation and trafficking of Bulgarian women. This results in support of the activities of DofBF.

These ethnicities have been served:

These populations have been impacted:

Prevention, Intervention & Outreach
Our desire is that young women would not be sexually exploited to begin with, and therefore, as stated above, one-on-one conversations, educational talks in groups, and printed information was distributed within at-risk populations in Bulgaria. Through intervention, counseling, and street outreach youth and women were challenged to understand that sexual exploitation is not a good thing, and that it is possible for the lives of those caught in this lifestyle to be transformed.

Long-term care has been provided to Bulgarian women, some with their children, through the Rose Garden Program as they have moved away from lives of prostitution to new ways of life. Also, as part of the mandate of the DofBF, opportunities are provided for educating others to the realities of commercial sexual exploitation and human trafficking. Therefore, we have given informational seminars and workshops focusing on raising awareness of these issues. These issues include PTSD as well as the trauma and vicarious trauma experienced by after-care givers. During 2018, these services were provided to many people including social workers, social service providers, church members and pastors, business leaders, the general public and volunteers, and professionals involved with sexually exploited/trafficked youth, women and their children.

Volunteers and staff with the Daughters of Bulgaria are committed to the servant leadership model of the SAFoundation - Canada.

Any cookies that may not be particularly necessary for the website to function and is used specifically to collect user personal data via analytics, ads, other embedded contents are termed as non-necessary cookies. It is mandatory to procure user consent prior to running these cookies on your website.